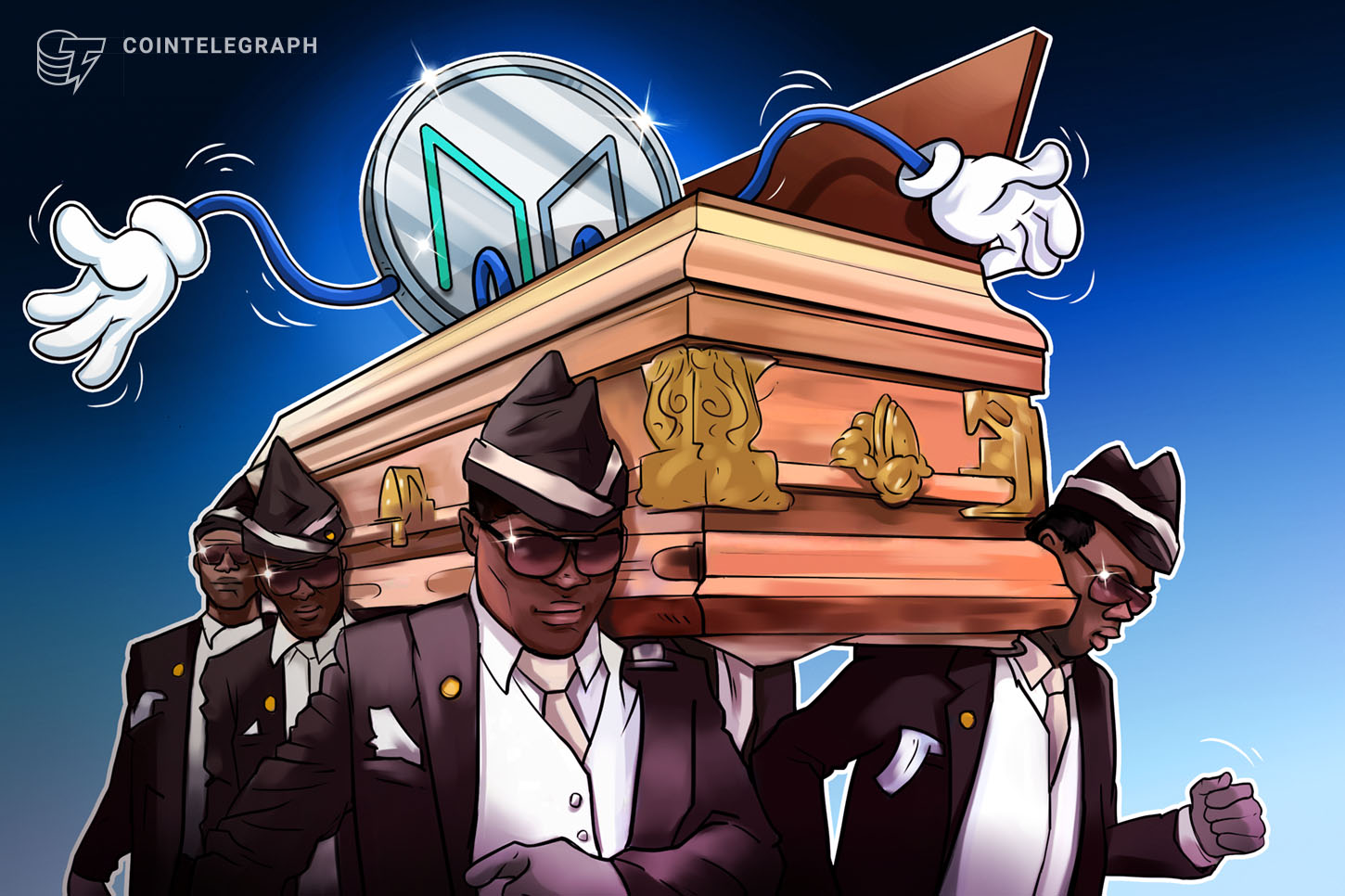 The decentralized finance lending market Maker, like many crypto participants, suffered losses during the price collapse of “Black Thursday” on March 12. The price of Ether (ETH) declined by about 50% within 24 hours, triggering a zero-bid attack as the Maker system became swamped with a huge volume of liquidations.

In the aftermath of the crisis, Maker recorded losses totaling 6.65 million Dai (about $6.65 million) and has been forced to make sweeping changes to its governance and auction parameters. The project also added the stablecoin USD Coin (USDC) to its collateral pool.

Amid the losses incurred by the project, Maker community members are calling for compensation for vault holders. However, a lack of consensus over the appropriate percentage of the collateral to be returned, as well as the proper ETH–Dai valuation, might delay any such restitution.

The events of Black Thursday represented another significant setback for the DeFi market in 2020, which already saw rogue actors exploit vulnerabilities in flash loans to acquire ETH with zero collateral, thereby causing millions of dollars in losses for projects such as bZx.

Before examining the events of Black Thursday, it is important to present a summary of the Maker governance protocol to better understand why the ETH flash crash caused a cascade of liquidations. Simply put, MakerDAO is the base protocol that supports the Dai stablecoin, which is pegged one-to-one with the United States dollar.

Apart from Dai, the project also has another token, Maker (MKR), that acts as a governance and equity token. MKR token holders can vote on matters impacting the MakerDAO protocols, such as fees and collateralization ratios. By depositing ETH into the Maker smart contract protocol, a user enters into a Collateralized Debt Position, or CDP. The Dai realized from entering the CDP is based on the collateralization rate.

Since Dai is supposed to maintain a one-to-one peg with the U.S. dollar, any substantial fluctuation in the price of the base collateral, which is ETH, will cause the debt position to close. This situation is indicative of what happened on Black Thursday. When the price of ETH fell, CDPs ended up not having sufficient collateral to stay above the collateralization ratio. Under normal circumstances, the MakerDAO protocol would trigger automatic liquidations to return capital to the market and make the CDPs “debt-free” once again.

The first step in the process is a debt auction that sees freshly minted MKR exchanged for Dai that is then burned. The token burn helps to repay the underlying debt even when the ETH value is not sufficient to fully collateralize the position. A second step involves a corresponding collateral auction which involves the buying of MKR tokens with ETH. By selling a sufficient amount of the collateral, the system can accumulate enough capital to cover the debt and the associated fees.

Once again, under normal circumstances these two auctions happening concurrently cancel each other out, preventing MKR dilution, as the token is designed to be a deflationary currency. Thus, as long as the ETH price fall does not cause a huge undercollateralization of the CDP and the smart contract protocol can sell the base collateral at or near spot market price, both auctions should see a return to equilibrium of the MakerDAO lending market.

The burning of MKR reduces the circulating supply of the token, meaning the value held by vault holders increases. These market participants also receive liquidation fees and sundry accumulated interests from the auctions.

What happened on Black Thursday?

As previously reported by Cointelegraph, MakerDAO published a report that provided an examination of the losses incurred from the zero-bid attacks that occurred on Black Thursday. The document compiled the performance of its ETH-collateralized Multi-Collateral Dai — or MCD — system from inception to date as a way of determining a fair compensation formula for affected vault holders.

On that fateful Thursday, panic spread across not only the crypto space but the broader financial markets. The previous day, the World Health Organization officially declared COVID-19 to be a pandemic. This announcement happening amid the Russia–OPEC oil price war saw investors moving to exchange investment assets for cash. Within the crypto scene, the sell orders triggered a cascade of liquidations, with the crypto derivatives platform BitMEX seeing about $1.6 trillion in crypto long positions decimated in the market panic.

When the spot price of Bitcoin (BTC) and ETH tumbled, market makers seemed unable to ensure any form of stability for the market. Under normal market conditions, market makers profit from the bid–ask spread and provide order book liquidity. However on Black Thursday, market makers that didn’t withdraw their limit orders ended up holding positions deep in the red. With the main liquidity providers underwater, crypto derivatives exchanges began experiencing a liquidity crunch that reverberated across the market, culminating in BTC and ETH dropping by about 50% each.

The massive ETH price decline meant that MakerDAO MCD CDP positions became undercollateralized, triggering liquidations. Usually, these liquidations proceed via the two concurrent auctions detailed earlier in the text. However, Black Thursday ended up being a black swan event for MakerDAO as liquidators became swamped by the sheer volume of forced liquidations. An excerpt from the report detailing the nature of the zero-bid attack reads:

“One bidder discovered they could actually win auctions for collateral with effectively 0 DAI bids. 1461 auctions liquidated 62,842.93ETH for no collateral return to 320 vaults and a cost of 6.65M DAI to the Maker system itself. This event was not only costly to the vault holders, but was to the Maker system as well, in capital costs, system confidence, and Maker reputation generally.”

According to the report, apart from zero-price bids, half-price bids also occurred during Black Thursday, which contributed to vault holders receiving minimal collateral. The presence of zero-price and half-price bids points to unforeseen issues preventing market participants from submitting bids on particular auctions, allowing rogue actors to acquire ETH with little or no collateral.

As stated by the document, 24.7% is the maximum collateral return seen during “good markets.” On average, the period before Black Thursday saw a collateral return of about 17.77%, which fell dramatically to 2.59% on March 12. In a conversation with Cointelegraph, J. R. Forsyth, the founder of the blockchain project Onfo, commented on the absence of robust fail-safe protocols in Maker’s initial architecture to prevent the occurrence of the zero-bid attacks in the first place:

“The liquidators of the MakerDAO attack did not cope with their responsibilities. The error in the general code did not allow users to take part in the auction. Moreover, the developers did not develop a fallback scenario in advance that would allow them to update the system, not in 24 hours, but faster.”

According to Alex Melikhov, the CEO of the stablecoin platform Equilibrium, the losses incurred by the MakerDAO protocol during Black Thursday have more to do with the project’s shortcomings than the ETH flash crash. In an email to Cointelegraph, Melikhov opined:

“If the system could’ve handled liquidations as initially expected the volatility of the underlying collateral should have nothing to do with the sustainability of the entire debt positions.”

For Forsyth, protocols such as Maker should prioritize detailed audits of their smart contracts, adding: “An important part of the security audit of such protocols should be stress testing, which shows how smart contracts behave in an extreme situation.”

MakerDAO lost $6.65 million as a result of the zero-price and half-price bid attacks on Black Thursday. The event exposed vulnerabilities in the project’s governance protocol during periods of heavy liquidation. According to Forsyth, the losses incurred by MakerDAO are indicative of some of the issues plaguing the DeFi space, stating:

“Probably, the negative experience of MakerDAO will stimulate the appearance of alternative clients and scenarios that can be run in a short period of time. Recent attacks have shown that DeFi protocols are unstable in conditions of increased volatility. In such periods, complex formulas based on their algorithms cease to work.”

For Long Vuong, the CEO of the smart-contract platform Tomochain, projects like Maker should prioritize simpler governance processes that deliver robust security and are resilient to the actions of rogue agents. In a conversation with Cointelegraph, Vuong argued:

“The auction system is complex so preventing liquidations due to prices precipitously dropping during a financial panic requires a proper fail-safe plan. Part of this is to simplify and minimize the governance processes to expedite solutions during emergencies.”

Following the events of Black Thursday, the Maker community sought to implement protocols that would prevent a situation where keepers were unable to participate in an auction bid. The zero-price and half-price bid attacks only worked because those auctions had only one bidder and were thus able to liquidate ETH with minimum Dai bids.

As part of its conclusions in the report, MakerMan, the document’s author, revealed that even during Black Thursday, auctions with multiple bidders returned between 10% and 11% on average to vault holders. With more auction access points added, bid count is reportedly up by 200%, but the collateral return is still far below the 17.77% average during the pre-Black Thursday period. Commenting on the changes made to the MakerDAO governance protocols, Melikhov remarked:

“Increasing auction terms to six hours and getting rid of the auction timer seemed to me sufficient technical measures to prevent a recurrence. Other steps were mostly focused on troubleshooting rather than preventing. Good for the MakerDAO project that community committed to participation in MKR auctions through the arisen syndicates and directly.”

Following the losses incurred, MakerDAO corrected the collateral shortfall via debt auctions with investors buying newly minted MKR tokens. As previously reported by Cointelegraph, venture fund Paradigm Capital led the auction round, winning about 68% of the MKR sold during the process.

Given the fact that the ETH flash crash of Black Thursday triggered the massive liquidations on the platform, MakerDAO has since added the USDC stablecoin as a collateral on its lending market. Commenting on the decision to add USDC as collateral for opening CDPs, Melikhov remarked:

“I think that adding USDC collateral was a necessary measure to stabilize the system after a serious stress test and further dramatic losses. Some users were even considering the proposal for USDC collateral as ‘throwing up the white flag’. We saw that DAI’s price started deviating from its one-dollar target after Black Thursday. It was floating above $1 creating an obvious arbitrage opportunity for potential borrowers of DAI who could lock Ether, get DAI at $1, and sell it with premium.”

Recommendations and calls for compensation

With the collateral return to vault holders still low despite the creation of more auction participation access points, the report called for lot sizes no higher than 50 ETH. According to the document author, larger lot sizes are reducing the auction performance despite the presence of more bidders.

Instead of having lot sizes that exceed 50 ETH in a single auction, the report called for a staggering of collateral return, with vault holders receiving half of the total percentage collateral return from smaller lot sizes. The remaining half should then be split between medium and larger lot sizes as a way of creating a baseline for observing auction performance vis-a-vis lot sizes.

The report also suggested that auctions for larger lot sizes should include a higher minimum number of bidders to improve bid efficiency. According to the recommendations, only participants with the necessary capital requirement should have access to larger lot size auctions.

Apart from providing recommendations for future MakerDAO governance protocol changes, the report also aimed to establish a baseline for compensation considerations. However, responses to the report on the MakerDAO forum show that community members have not yet reached a consensus on the preferred percentage collateral return to affected vault holders, as well as an appropriate ETH–Dai valuation.